I should start by pointing out that this technique is a strength builder, and a potential mass builder. It involves pushing your muscle to failure which is really a muscle-building technique, as it forces the tissue to overcompensate more than usual in the recovery period after exercising. Trying to lift after failure is potentially risky, though it can be done, despite the counterintuitive nature.

What I suggest is actually a safer way of continuing after failure without the risk of injury that straining to lift one or two more ‘cheat’ reps can cause.

What is the ‘Point of Failure’? 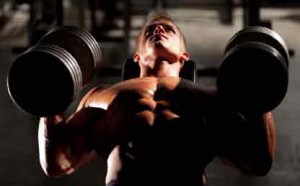 Many of you will know what this means, especially if you’ve trained to build mass at any point. For those of you who don’t know, this is where we work a muscle until it can no longer exert the necessary force to accomplish the movement or hold the position, depending on the type of exercise.

The easiest example using a dynamic exercise is with pushups. Everyone knows pushups. If you were to do pushups until you could no longer lift your weight, then that point is the point of failure. No matter how hard you struggle, you just can’t push yourself up again. That’s where a lot of people stop the exercise. Done. Finito. Pecs are finished, time to move on.

Okay, now remember that example, but think about that point a little harder: you may not be able to push yourself up to a straight arm position, but you can exert some force, right? You can sort of push against the ground so you are still engaging the pectoral muscles that have ‘failed’, but you can only hover there like that, an inch off the deck…or not; maybe you just push and go nowhere. Either way, you’re pushing.

What if instead of viewing it as a completion, you changed your thought process and used it as an opportunity to work the muscle deeper? What if you turned your dynamic exercise into a static isometric.

Okay, for people who just said ‘iso-what?’, here’s a little explanation of Isometrics.

Isometrics In A Nutshell

Dynamic weighted exercises involve movement, generally the repetitive shortening and lengthening (contraction and extension) of muscles under load with concomitant bending of joints. Bench press is a classic example.

Isometric exercises, however, involve no change in muscle shape and no movement at the joints. The static exercises in Yoga are an example, like the Plank.

There are two basic types of isometric exercise:

This type of training improves strength and stability in the muscle and can greatly augment any other program you are following. Indeed, isometrics can improve dynamic muscle strength.

Now that I’ve covered Isometrics, maybe you can see where I’m headed.

Holding The Point of Failure

A lot of people already incorporate isometrics into their weight lifting. In fact, many – perhaps most – dynamic exercises incorporate isometrics, for example your forearms during bicep curls, your core muscles during a squat etc. Others might perform it mid-set, for instance, during a seated row, you might pull the cable and keep it near your chest to perform a mid-set isometric.

These are good techniques to build strength for sure but there maybe a subtle difference between that and what I am suggesting.

What I’m saying is, at the point you can no longer complete a rep – i.e. the point of failure – just start the rep, because there’s always a bit of force you can exert…and hold it, for five maybe ten seconds. And then relax.

This will almost always be completed at the end because normally you will have done a drop set or a straight set to failure in order to ‘finish off’ the muscle.

Why Turn Failure Point Into An Isometric?

Going back to my earlier example of pushups. You’ve reached the point of failure and all you can do is literally push at the ground, and go nowhere. Do this, with as much as you’ve got and count off ten seconds.

The purpose is simple: you will have performed an isometric exercise at a point you would normally end the set, thereby fatiguing your muscles further, which will in turn cause them to overcompensate and grow more.

In other words, it’s a strength and mass builder. What’s more – it’s safe.

When Should I Do This?

An important question, because this type of ‘exercise extension after the point of failure’ should not be done every time you work a muscle. Say you have one week in every three or four where you incorporate drop sets to failure, this is when to apply this technique, and even then only once at the end of each failure set.

This is going to be an upper body technique mainly, because fatiguing the legs to failure anyway can be a challenge, not to mention unsafe. There is no way you should free-squat even to near failure without a spotter.

Hopefully by now you’ve can see how you could apply this across the board.

If you are squirming and moving to maintain this isometric position then you’re not doing it correctly. This method is about stability and finding a static, yet engaged resistance at the point where you cannot accomplish a full rep.

Try and engage the core as much as possible, even when doing a bicep curl. Eventually, isometric training will be something you are doing constantly throughout your workout.

Building muscle, strength, speed and explosive power while keeping your diet under control is one of … END_OF_DOCUMENT_TOKEN_TO_BE_REPLACED

Leanbean is a female fat burner manufactured in the USA. As is normally the case with diet pills for … END_OF_DOCUMENT_TOKEN_TO_BE_REPLACED

Boss Shred is a twelve week workout program created and offered by Boss Workouts. It is specifically … END_OF_DOCUMENT_TOKEN_TO_BE_REPLACED