A few guys may still find it hard to get their heads around the fact that some women like to lift weights, and may even be better at it than many men, but women have been excelling in weight lifting sports for a long time.

On June 16, 1979, Lisa Lyon became the first IFBB (International Federation of Bodybuilding and Fitness) Women’s World Body Building Champion. She was only 5’3″ tall, but Lisa could dead-lift 225 pounds, squat 265 pounds, and bench press 120 pounds. Then as now though, not every woman who chose to lift weights did so due to a desire to attain a chiseled physique. Some women just loved to lift and wanted to prove their worth in completion. In 1981 Judith Ann Glenney won a gold medal in the Women’s National Championships. She did it again in 1982, 1983, and 1984. In fact she won a total of 8 gold medals before she called it a day.

Possibly thanks to the example set by these early female pioneers, the female weightlifting and bodybuilding sports have gone from strength to strength. 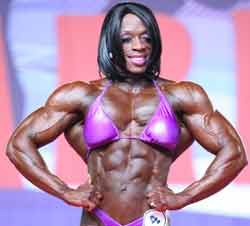 Iris Floyd Kyle was born on August 22, 1974. She is an American professional female bodybuilding champion.

She lives in Texas and is currently the most successful bodybuilder (male of female) to ever strike a pose.

Thus far in her career, Iris has attained 10 overall Ms. Olympia wins and 2 heavyweight wins. She has also won the Ms. International title 10 times and ranks as the best female bodybuilder on the IFBB Pro Women’s Bodybuilding rankings list. http://www.iriskyle.com/

Daniela Kolesnik is a Powerlifter who was born in Russia in 1998. Although she is still only young, Daniela has already made a name for herself on the Powerlifting circuit.

In fact, when she attended the 2013 IPF World Junior & Sub-Junior Championships, Daniella set a new world record for her weight group (up to 43kg) when she successfully squatted 138kg—at the time she had a bodyweight of just 42.64kg.

British powerlifting sensation, Zoe Smith, was born in London in 1994 and is the present British “clean and jerk” record holder. Although she is only small-built (standing 5′ 3″ and weighing 198lbs), Zoe became the first English woman to win a Commonwealth Games weightlifting medal in 2010 when she won a bronze medal in the women’s 58kg division at the Commonwealth Games held in Delhi, India.

Her win was made all the more impressive by the fact that it was her first time competing at an international level. Two years later, Zoe was on top form again, and broke a British record, when she attended the 2012 Summer Olympics in London and raised 121kg barbell over her head.

Female bodybuilding champion, Yaxeni Oriquen-Garcia was born in Venezuela in 1966 and is snapping at Iris Kyle’s heels by being the second-best female bodybuilder in the IFBB Pro Women’s Bodybuilding rankings list.

Yaxeni first began taking a serious interest in bodybuilding in 1989, and quickly began to make a name for herself. She won four amateur contests in 1993, and earned her professional card after she won the Ibero (Central) American Championships, after which she moved to the US. Yaxeni is the most successful Venezuelan bodybuilder in the world. She has won Ms. International five times and is, as yet, the only Venezuelan bodybuilder to have bagged a Ms. Olympia title. http://en.wikipedia.org/wiki/Yaxeni_Oriquen-Garcia 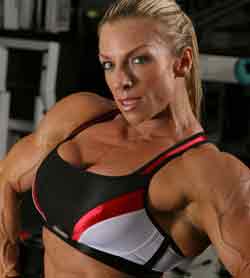 Presently ranked at no.3 on the IFBB Pro Women’s Bodybuilding rankings list, Debi Laszewski was born in 1969, in Wausau, Wisconsin, USA. She first became interested in bodybuilding when she was 20 years old and was wowed by the physique of the actress Linda Hamilton in the second Terminator movie.

Debi’s first taste of bodybuilding success came four years later when she stuck a pose in her first ever competition and won her class. Since 2009, Debi has taken a top-six spot in every Ms. International and Ms. Olympia competition.

Building muscle, strength, speed and explosive power while keeping your diet under control is one of … END_OF_DOCUMENT_TOKEN_TO_BE_REPLACED

Leanbean is a female fat burner manufactured in the USA. As is normally the case with diet pills for … END_OF_DOCUMENT_TOKEN_TO_BE_REPLACED

Boss Shred is a twelve week workout program created and offered by Boss Workouts. It is specifically … END_OF_DOCUMENT_TOKEN_TO_BE_REPLACED