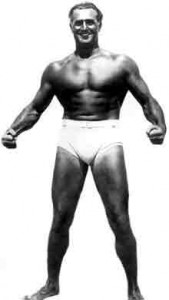 Is it possible to build big biceps without vising the gym or pumping iron? Many people would say it is not, but although standard resistance training forms of exercise—usually involving weights—are the most popular tool for carving out a chiseled physique they are far from being the only tool available. All the muscles can be exercised without the need for weights or expensive machinery—and that includes the biceps.

Charles Atlas (1893 – 1972) was in every way a self-built man who turned himself from a “scrawny weakling” into the most popular muscleman of his day and boasted a pair of 17″ biceps. That’s not a huge pair of guns, but 17″ is still impressive—especially for a man who never lifted a free-weight in his life.

Atlas was the living proof that it is possible to build a big strong body and sizable arms in a barbell-free zone. Other strongmen can boast similar achievements including Charles Salvador (formerly called Charles Bronson), who is one of the most “naturally” strong men in the world despite having spent most of his life in solitary confinement with no access to a gym or any of its trappings. 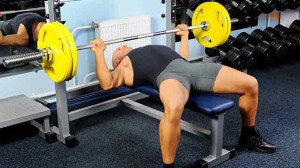 What about the opposite end of the spectrum? Training to near exhaustion with weights.

Is there any merit to OVERREACHING, as we call it? Take a look at our article that deals with the basics of the concept as a technique.

How to Build Big Biceps without Weights

All muscle groups benefit from regular stretching exercises and the biceps are no exception.

Muscles are covered by a layer of connective tissue called the fascia. It helps keep your muscles in place, but the facia can also restrict muscle growth because it is so tough its presence can make it hard for muscles to expand. When people stretch their muscles though, the fascia is also stretched and this can create a little extra room for the muscle tissue to grow into. 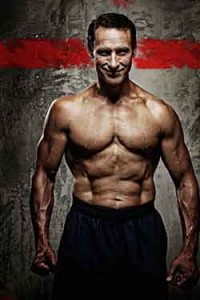 can be performed by clasping the hands behind the back (fingers locked) and turning the palms to face the floor. Keeping them as straight as possible, the arms should then be levered upwards, away from the body, until a stretch is felt in the bicep area. This position should be maintained for 20-30 seconds. It is important not to overstretch cold muscles though, so don’t overdo it. However, in the case of post-exercise stretches, if the biceps are already nicely pumped it is usually safe to stretch a little harder.

is another popular bicep stretching method. To perform the stretch stand with your feet shoulder-width apart and lift your arms to form the classic “T” shape. Once again the palms should be facing towards the floor, but you must then rotate the arms through 90 degrees until your palms are facing behind you, at which point it should be possible to feel a stretch in your biceps. Hold this position for 20-30 seconds.

“Dynamic Tension” is the name chosen by Charles Atlas for the type of exercises he used to transform his body. Like conventional weight training, Dynamic Tension is a form of resistance training. The big difference is the resistance is not provided by heavy weights, but by pitting one muscle or muscle group against another. Fans of the technique point out it is almost impossible to harm yourself while performing Dynamic Tension exercises because all the force involved is self-supplied. There is also an added bonus: as they become stronger, the muscles have the ability to exert more force; thus making the exercises more effective.

A simple alternative to barbell curls

can be performed standing with the feet shoulder-width apart. Allow the arms to hang loose in front of the body. Making a fist (as if holding an invisible barbell) the biceps should be clenched as tightly as possible while the invisible bar is slowly curled up to the chest and then allowed to fall until it has returned to its starting position. Try to picture a heavy barbell as you perform the curl and to imagine how much resistance you would feel. Perform 10-20 repetitions and don’t forget to get plenty of air into the lungs so the muscles are not starved of oxygen.

An alternative to dumbbell curls

can be performed sitting down or standing. To exercise the left arm, place the right arm across the body and apply 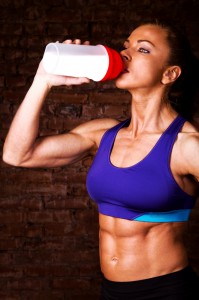 Weight-free training methods are not for everyone, but the options are there and they can be startlingly effective. Such methods can also be useful when travel or vacations make it impossible to train in the favored way. Weight free training is a portable system. It can be practiced anytime, by anyone, anywhere and, as Charles Atlas and countless others have already proved, it is a system that works.

Building muscle, strength, speed and explosive power while keeping your diet under control is one of … END_OF_DOCUMENT_TOKEN_TO_BE_REPLACED

Leanbean is a female fat burner manufactured in the USA. As is normally the case with diet pills for … END_OF_DOCUMENT_TOKEN_TO_BE_REPLACED

Boss Shred is a twelve week workout program created and offered by Boss Workouts. It is specifically … END_OF_DOCUMENT_TOKEN_TO_BE_REPLACED